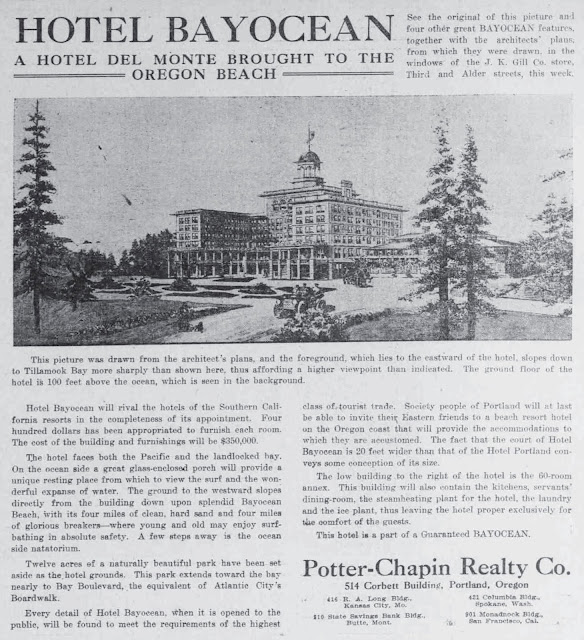 In Bayocean: The Oregon Town that Fell Into the Sea, Bert and Margie Webber wrote that the Bayocean Hotel was built at 140' above sea level, the highest point on the spit. However, an ad placed in the Oregonian on October 4, 1909, by the Potter-Chapin Realty Company, bragged of it standing at just 100'. A 1939 map drawn by the US Army Corps of (USACE) Engineers showed a 100' topographic line surrounding the hotel ruins. The Webbers must have seen brochures and other ads bragging that the hotel would be built on Bayocean's highest point and assumed that the USACE was referring to that spot when it said Bayocean's highest point was 140' in a 1940 study. Both were incorrect.

In 1957, the USACE produced a more comprehensive map with the highest point shown at 154'. Studies on Bayocean, including some written by USACE, continued to use the 140' high point long after that report came out, likely because it was not widely distributed. I found this report at the National Archives in Seattle a few years after I hiked to the highest point myself, which was more fun.

Soon after Bayocean's history caught my interest, I began wondering what the elevation of the highest point was today, assuming it was lower than the hotel elevation. So I roamed Bayocean on Google Earth with my cursor noting the elevations shown in the margin. I found one at 126 feet and headed out there on December 16, 1914, with my friend Eleanor to find it. Later, looking at Google Earth again, I found several spots higher than 140' and tagged the highest one at 153' (the aerial view of it below is looking northwest towards Tillamook Bay). This made me realize that it's likely no one has ever been to Bayocean's highest point due to its remote location being a spot where nothing was ever built. With coordinates in hand (45.538290 -123.945063), Eleanor and I set again January 19, 2015.
﻿ 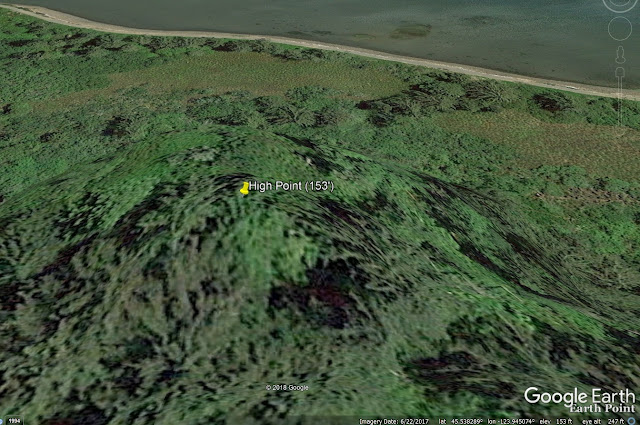 On a map, the shortest route to the high spot is a direct line west from Dike Road. We discovered that this would require hip boots we didn't have in order to get across a marsh, followed by a tough push up a steep incline through the nearly impenetrable brush. So we returned to the road and hiked south, then followed an established trail across the "sand gap" shown on maps, and headed uphill from a spot directly south of the high spot. We needed all of our tools (map, compass, GPS app) because the trees and other foliage was so thick in places we couldn't see far in any direction. At one point I entered info on my GPS app incorrectly, which forced us to backtrack. We tried using deer trails but they just led to dead ends where they bed down at night. Often we had to crawl under the brush to make headway. Luckily, when we got close the exact spot it was made obvious by a tall tree centered in a little knoll that stood above the surrounding turf. My GPS app registered 152'. We decided to try a shorter route back, hoping to avoid such extreme bushwhacking, by heading southeast on a ridgeline back to Dike Road.

We figured going down a steep slope with no marsh at the bottom would be a snap. It wasn't. The brush was thicker there than anywhere else. Allowing our bodies to fall forward and down into the brush, picking ourselves back up and doing it again, was the most effective approach. I was impressed by Eleanor's sense of humor, fortitude, and willingness to put up with such a lousy trip leader.

Later, when I told Jonathan Allan, a coastal geomorphologist with the Oregon Department of Geology and Mineral Industries what I'd learned, he said this highest point was shown on their LIDAR map at about 153'. Sea level rise over the last 60 years would have been enough to lower the elevation from above to below 153.5'. Rounding up and down does the rest in explaining how 154' in 1959 shrank to 153' today.
﻿
No comments:

A January 12, 2015 the Tillamook Headlight-Herald reported that at a public hearing on January 8th the Tillamook County Planning Commission denied the conditional use permit  requested by Dale Bernards (Bay Ocean LLC) to build an eco-resort on the 53 acres that he owns on Bayocean .The Tillamook County Planning Commission web page has an audio recording of the hearing and minutes of their November 13 meeting pertaining to the subject.

The Tillamook County Pioneer ran a story May 3, 2014 titled "Owner of proposed Bayocean eco-resort invites county to purchase land", which suggests Bernard's underlying purpose. It includes useful history on land ownership and usage on Bayocean. They later reported that Bernard had not filed an appeal of the decision by the January 22nd deadline, and that he was cryptic about future plans.

A 23-page Bayocean Park report submitted to Tillamook County on August 27th was produced by Stephens Planning and Design, and the students of a University of Oregon "Green Cities" course, instructed by Ric Stephens.  The report was comprehensive and and well produced, containing information of value to Bayocean aficionados far beyond the eco-resort plans: current and historic maps, a history of Bayocean, details regarding fauna and flora, photos, graphics, and references to sources of more information. Especially helpful in my own search to understand how the past and present of Bayocean comes together is a plat of the original town site laid over a modern bird's eye view of the spit. Unfortunately the URL is no longer valid.

Residents of Cape Meares, the village at the south end of Bayocean, formed the Save Our Spit Committee after learning of the proposed eco-resort. They sponsored the survey referenced earlier and submitted 156 pages as "Exhibit C: Written Testimony Part 2 " to the Planning Commission. It includes a scrapbook of photos called "This is Bayocean Spit", reports on geology, wildlife, potential eco-resort impacts, early Native American use of Bayocean, and much more.
The Oregon Coast Alliance has a web page dedicated to campaign against Bernard's Bayocean development . Their testimony was "Exhibit C: Written Testimony Part 1" . At 224 pages it also contains a mass of information.

Controversial as it may be, the proposed Bayocean Park has produced a collection of information that should be of interest to anyone interested in Bayocean's history and geography.