The photos below were taken by Carl Schonbrod (Dorian Studies, Tillamook, OR) during the week prior to January 24, 1953, when a photo similar to the one on the right appeared in the Oregonian. There was no story; just a caption saying the cabin, which was built by the Hance brothers, had since slid into the ocean. I wanted to know where the cabin started its journey and who owned it.

After chasing leads nowhere for months, I sent the photo to Perry Reeder. He recognized the house as one of two little cabins sitting next to each other uphill and to the northwest from the Strowgers who lived right on Bay Street. Perry didn’t know the owners of the house. He and his buddies just called it the “fish pond house” because it had a manmade pond with some goldfish in it.

Perry’s description best fit block 48 on the Bayocean plat map. I noticed that property taxes on the 1958 Tillamook Circuit Court foreclosure proceedings were much higher for lots 23 and 24 than others in the area. The lots were owned by H. W. and Laura E. Currin.  I found a 1919 photo of Harvy William and Laura Estella Currin’s family at Find-A-Grave provided by their niece, Anna Dunlap, and a biography written by one of their daughters, Ruth Currin Spaniol. After Dunlap confirmed that the Currins had lost a cabin on Bayocean, I read Spaniol's biography Over the die-or-do: a story of a marriage at the Oregon Historical Society.

Harvy Currin’s ancestors arrived in Oregon as pioneers in 1845 and settled at Currinsville, just north of Estacada. By the 1940s Harvy and Laura had a thriving real estate business in Hillsboro. They knew houses had been washing away for decades on Bayocean, but in 1945 decided to take a chance on “two little houses sitting side by side…they and all their family could have at least $600 worth of fun there before those houses, too, were washed away.” Even grandchildren helped fix up the cabins, including painting Dutch designs on shutters, which they recognized eight years later in the Oregonian photo.
Next, I searched Tillamook County deed indexes and learned that Ella May Hutchinson, a widow, had first purchased the two lots in 1911 for $450. She transferred an adjacent portion of each lot to P.D. and Elizabeth Hance in 1914, which is when the Oregonian listed Hutchinson among new cabin owners. The cabins went through several ownership transfers before the Currins purchased them. They went on to buy most of block 47 during September and October of 1947. This was land between their cabins and Bay Street.
In 1949, seeing the ocean approaching their hilltop cabins, the Currins bought another house further south on lot 33 of block 44. Buck Sherwood recalled Judge Richardson owning the house. Deed Book 74, page 244 shows Richardson purchasing the lot on October 17, 1936. Bayocean News columns of December 17, 1936, and February 25, 1937, in the Tillamook Headlight-Herald, describe Swan Hawkinson building a cabin there. Judge Richardson sold the cabin in 1945, it turned over a couple times before the Currins purchased it. The Currins lost this cabin first because it was part of the spit that the ocean tore out on November 13, 1952. “Fish pond house” and its partner were at the southern end of the island that remained, but on January 29, 1953, the Tillamook Headlight-Herald reported them having fallen. The paper called them the "Pratt houses," mistakenly referring to previous owners.
What most surprised me is that on June 25, 1952, just a few months before Bayocean became an island, the Currins bought lots 29-31 of block 57. The house on lot 29 may be remembered as Mueller’s by Bayocean alumni, but Frank and Rose Dordan, John and Ethel Scott, and Edwin and Jean Jenkins owned it after them. This Currin house was half-filled with sand by the US Army Corps of Engineers when they built the dike that sealed the gap in 1956. It was one of just three houses they left standing. The last of these, belonging to the Notdurfts, fell in 1960.

In 1957 the Currins bought a lot in Garibaldi but sold it just four years later, not long before Harvy's death. Tillamook County deed records show the property passing through many hands over the decades since then. The current tax lot number eluded me but Wendy Schink, Tillamook County Cartographer, quickly determined it was 21BD02200. This .86 acre lot climbs the hill behind Garibaldi and the home there has a great view of Bayocean. The Currins would have loved it.
October 30, 2021 update: eBay has the print version of the Schonbrod photo used in the Oregonian for sale. A note at the bottom says it was taken January 23, 1953.

T. B. Potter's Success Before Bayocean

The 1900 U.S. Census shows T. B. (Thomas Benton) Potter working as an advertising agent, and his family living as boarders in a household of ten, at 232 S. Hill Street in Los Angles, California. A year later they were living at 418 Eugene in Portland, Oregon, and Potter had formed a real estate partnership with H.L. Chapin, with offices at 246 Stark (1901 and 1903 R. L. Polk Portland City Directories at Ancestry.com). They worked with landowners to carve homesteads into marketable lots and share the profits. From 1902 to 1906, Potter (with Chapin most of the time) created more than a dozen subdivisions in Kansas City, Missouri, Portland, Oregon, and in the San Francisco Bay area (Bayocean: The Oregon Town that Fell Into the Sea, Appendix D). They eventually lost the wealth acquired doing so in chasing their Bayocean dream. But neighborhoods continue giving tribute to their success, several of them being named after Potter's youngest daughter, Arleta. 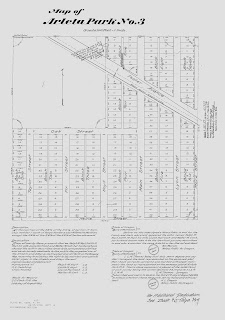 Arleta Park No. 3 is located within the Mt. Scott–Arleta Neighborhood in SE Portland.  Arleta Neighborhood grew up around the Potter-Chapin subdivision, with its school, post office,  and library. Grocery stores and other retail stores made it a retail hub midway between downtown Portland and Lents on the Mt. Scott Trolley. The lots were cheap relative to the west side of the Willamette River, so working families could afford to buy them, build a home, and catch the trolley to work each day.

In 1906 T. B. Potter developed another Arleta Park at Half Moon Bay on his own (as well as another subdivision called Reis, per California newspaper ads). He likely saw the potential of this area becoming a suburb of San Francisco by way of the Ocean Shore Railroad, which reached there in October, 1908. Local history buffs indicate (via Wikipedia) that there was an Arleta Station at Railroad Avenue and Poplar Street that is now used as a residence.

Arleta's descendants told the Webbers she changed her name to Natalia as an adult because she didn’t appreciate her father naming subdivisions after her. One can just imagine schoolmates kidding her about it. She must have got her point across because nothing in Bayocean Park bore her name. Ironically, Arleta was the last Potter to own a Bayocean lot. She stopped paying taxes on lot 81 in block 39 only after the sea destroyed it in November 1952.


Building and running a resort requires a completely different skill set than developing subdivisions, but the Potters might have pulled it off if the railroad to Tillamook had not taken three years longer than promised to get people to Bayocean Park. The hectic schedule and stress are the most likely causes of Potter going insane in July 1910. His wife Fannie took him home to California, then across the world in search of a cure, but found none. He died at home in 1916. By then, his son Thomas Irving and Fannie had lost control of Bayocean to a court-mandated receivership. Two succeeding ownership groups couldn't make a financial go of it either. The Bayocean dream failed financially long before the ocean washed it away.
No comments: