﻿﻿﻿Perry Reeder gave his Bayocean presentation to a packed house at the Tillamook County Library on August 19th, 2015. Sarah Beeler did a great job of promoting the event by placing a sign at the entrance to the library and advertising in the Tillamook Headlight Herald weeks in advance. I posted in on several Facebook groups and saw a few history friends in the audience, some even came over from Portland. Unfortunately, our efforts were so successful, and the interest so high, that some folks had to be turned away, but not before Perry promised them to schedule another presentation. It was held on October 24th at 1 PM.

Perry used a PowerPoint, created by his daughter Sarah MacDonald, to accompany his telling of the geological processes that caused Bayocean's demise - and its human impact. Perry added some entertaining personal stories along the way. After an hour or so, he answered questions from the audience.

Earlier in the day, Bayocean alumni gathered at the community center/schoolhouse to reminisce. They were gracious in letting me hound them with questions.

Perry's family moved to Bayocean Park when he was six years old - in 1944. With his buddies, he explored the ruins, yelled at the blimp pilots as they passed close overhead each day, kept cool snorkeling along the sandy shores of the bay, and listened to Mr. Mitchell's sermons while waiting for the bus or buying candy at his store. In 1950, watching the sea moving relentlessly closer, his family moved to Cape Meares. There he eventually raised his own family while watching Bayocean's destruction - and rebuilding.

Prior to the construction of Tillamook Bay's South Jetty, the Army Corps of  Engineers hired Perry to captain a charter boat, from which their engineers and scientists took measurements that helped finalize its design. From 2002 to 2003 he served on the Bayocean Task Force. Perry owns a piece of property on the spit. A few years ago he coordinated county and family efforts to post signs to show where the business center of Bayocean had once stood - on the bay side of the spit. The fact that the signs are closer to the ocean now graphically illustrates the extensive geological changes that have occurred.  Perry now lives in Oceanside and spends most days managing his family farm in Beaver. In July 2017 Perry and his daughter Sarah wrote Bayocean: Memories Beneath the Sand.

On November 13, 1952, a severe winter storm ripped a 3/4 mile wide gap into Bayocean Spit, isolating the town center on an island. Soon after that, the Oregonian sent William Lambert to cover the story with photographer W. Kirk Braun. The article filled page 32 and part of part 33 in the November 23, 1953 edition. In one of the photos, Lambert changed the sign in Mitchell's General Store window from "Watch Bayocean Grow" to "Watch Bayocean Go" by covering up a couple letters. He may have thought it ironic, but it must have greatly distressed Francis Mitchell. He was known to be such a strident supporter of Bayocean that I'm surprised he let it happen, even at the age of 83. He must have been there because he and his wife Ida were two of the eight residents who stayed on the island after the breach.

Mitchell was one of the first to buy into the Bayocean dream and never let go of it. He would bend anyone's ear about Bayocean - even the children who lived there. One of them, Perry Reeder, recalls "Mr. Mitchell" stopping them each morning on the way to school, or at the bus stop, to preach about his political views and plans to make Bayocean great once again.

The only thing that could tear Mr. Mitchell from Bayocean was Mrs. Mitchell. On October 22, 1953, the Tillamook Headlight Herald reported that she'd suffered a stroke on the 18th and that after frantic efforts by islanders to send a signal, she was transferred to the Tillamook Hospital the next day with the help of folks on Cape Meares and the Coast Guard. According to the Tillamook Headlight Herald of November 5, 1953, Mr. Mitchell spent his nights with friends on Cape Meares to remain as close as possible to Bayocean but spent each day in Tillamook to be near his wife, who was not doing well. He'd only leave her side to wander about town and preach to folks at the courthouse, newspaper office, on the sidewalks, and in stores, as he had the children of Bayocean. But on the 4th he got so agitated that he threatened the sheriff, was taken into custody, and later judged insane. He was taken to the Oregon State Hospital on November 7th. Mrs. Mitchell died on December 28th.
Six years later, on October 22, 1959, Mr. Mitchell notified the editor of the Tillamook Headlight Herald of his move to Ward 2 so that he could continue receiving the paper. He complimented Mrs. De Cook for her work with Judge Effenberger to increase Tillamook tourism, adding that if folks had taken his advice about that in the past, "Bayocean would have been a success." Mr. Mitchell's fellow residents at the Oregon State Hospital heard about Bayocean every day until July 25, 1965. Only death could kill his dream and stop his expounding on it. 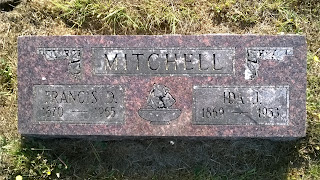 The bodies of Mr. and Mrs. Mitchell were reunited when Nellie Reeher purchased a combined headstone on
November 11, 1965, and had it placed at Spaces 1 and 2 of Lot 79 in Block 4 of the Tillamook IOOF Cemetery.
No comments:

One of the buildings Bert and Margie Webber did not locate on their drawings in Bayocean: The Oregon Town that Fell Into the Sea was the Bayocean School. Written reports said it was close to Cape Meares, and Perry Reeder pointed to the area on the original Bayocean Park plat map where the narrow southern section of the spit started to widen out, but I wanted to find the exact location so I can stand there like I had the Bayocean Hotel.

When I met Mike Watkins, he remembered that the school had been just a little northwest of the west end of A.G. Beals' dike. The dike had a one-way gate that let Coleman Creek flow out at low tide but kept Tillamook Bay water from coming back in at high tide. This changed the wetland into a meadow that dairy cows could graze. When he came to believe the ocean would eventually take the spit, Beals sold much of his Bayocean/Cape Meares holdings to Mike's grandfather, Robert W. Watkins. The land at the east end of the dike passed down to Mike and his siblings, which is why he's so familiar with it. When the breakwater that is now Dike Road sealed the breach in 1957, the ocean beach reformed (east of its previous location) and created Cape Meares Lake. Though the meadow and dike are now submerged, Mike said that remnants of the dike were still visible and could be used to point to where the school had been.

I then looked at 1939 aerial photographs from the Army Corps of Engineers. Because it was earthen, the dike is lighter in color and stands out against the grey background. By zooming in, I saw the schoolhouse just northwest (up and left in the photograph) of where the dike ends at the spit, confirming Mike's recollection. I also noticed that the school was in line with 4th Street, which is the road at the bottom of the photograph running south (down) from Bayocean (or Meares) Rd which runs east to west (left to right). Since 4th Street still exists, this gave me two sightlines, which were the same today as in the past, that I could use to find where the school had been on today's landscape.

That would have been good enough, but while looking at the Tillamook County Tax Map for other reasons I noticed an active tax lot in the area. The Summary Report for lot #1200 shows it's owned by Tillamook County School District #9. Like many other landowners, they'd kept ownership over the years. ORMAP and other GIS mapping systems project county tax lot layers onto modern aerial landscape views and provide GPS coordinates where a cursor is placed. Coordinates at the center of the school lot are 45.505148 N, 123.958730 W. The school may not have been at the center of the lot, but since the tax lot is only 100' x100' (.23 acres) it couldn't have been far from it. Now I had two ways to locate the school. 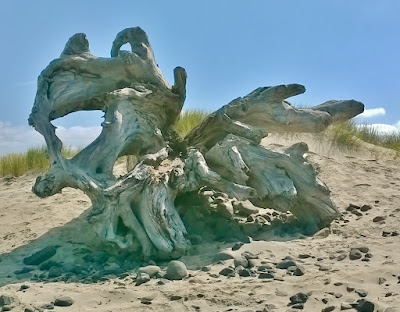 The next step was a field trip. Mike was gracious enough to lead me down a trail (viewing deer and an eagle along the way) to what had been the east end of Beals' dike. From there we were able to sight the west end using dike remnants. We then hiked out on the spit. Sighting south to 4th street, and east along the dike, we arrived at a spot on the beach where the coordinates matched. We were there! The spot is just 1/10 mile north of the parking space at the end of Bayocean Road, so easy to reach, and a stump just east of the spot makes it hard to miss. If the ocean reclaims or moves the stump, the coordinates will still work. Based on the aerial photograph and county tax map, the road out to Bayocean from Cape Meares would have been about 500' west of the spot. The average high tide in 1939 would have been about 1000' out.

When I asked, Mike recalled the school grounds being about 10-15' above sea/bay level. After leaving Mike, I saw Harold Bennett in his yard. He had attended Bayocean School, so I stopped to let him know about the stump, and asked him what he thought the school elevation had been. His answer was the same as Mike's. I later found a 1939 USACE topo map confirming Mike's and Harold's recollection. When you stand there, listen for the yells of children at play in the wind above you. 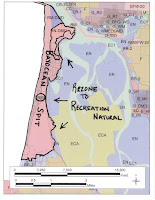 On November 12, 2015, the Tillamook County Planning Commission voted 5/2 in favor of changing all land north of Cape Meares Lake on Bayocean Spit that is currently zoned Recreation Management (RM) to Recreation Natural (RN). This came after listening to about 3 hours of staff input from Community Development Director Bryan Pohl and Senior Planner Sarah Absher and testimony from the public testimony. Written testimony, including detailed maps and zone change details, as well as audio of the entire meeting, can be downloaded at their website.

My earlier post Zoning Change For Bayocean Moves Forward reports on the April 9, 2015, Tillamook County Board of Commissioners meeting that started this process. Bayocean Park Eco-park Rejected reports on the proposal that prompted a request for this rezoning from the Cape Meares Community Association.

Whether you take a position on rezoning or not (I do not) the testimony given provides useful historical as well as current information about Bayocean.
No comments: