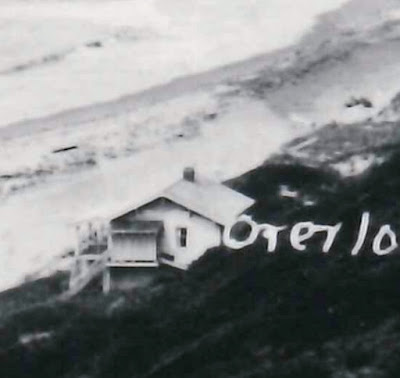 After figuring out the last house to fall into the sea, I began to wonder which had gone first. The first clue came from "Report on Beach Erosion Studies, Tillamook Bay, Oregon, With Reference To Bay Ocean", an Army Corps of Engineers study published on August 26, 1940. It said, "a total of 11 houses, 3 during the last winter, have either been wrecked or had to be moved since 1927..." The appendix included a photo by an unidentified resident captioned "About 1928 - Looking north from the top of dune midpoint of spit. House in lower left destroyed by a storm the following winter." I cropped the photo to zoom in on the cabin. The perspective of the original suggests it was taken from the north end of the hotel grounds. North of there, the ridgeline was forested. 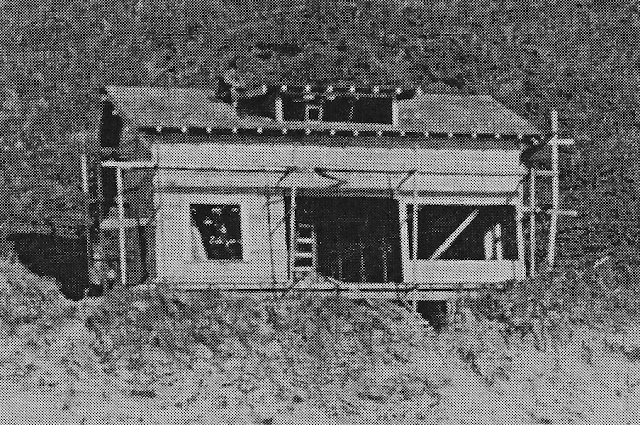 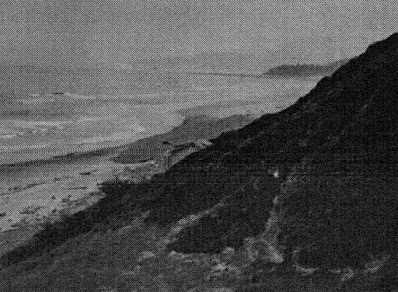 Months later, I came across a photo in the Burkhart Collection (Org Lot 371) at the Oregon Historical Society dated August 19, 1928. Though not a good image, the Burns house can be seen peeking out from the dune. The date suggested it was not the first to go.
In October 2020, I discovered that Georgia DeWitt had purchased her sections of lots 10 and 11 from her daughter and son-in-law, May and Enrique Mallory, who had purchased them a year later. Both parties had taken out loans for $300 in 1913 from Edwin Lockwood, Bayocean Park's chief engineer. So, why weren't there two houses in the Corps' photo? That question was answered when I looked at Tillamook County Assessment Rolls in October 2021. These journals list every property in Tillamook County. Houses are suggested by "improvement" values assessed.
Lots 10 and 11 of Block 61 each had a house, but the taxable party switched back and forth between the Mallorys and DeWitt, suggesting the two cabins were very close. But that meant both should have been in the Corps' photo. The reason they were not is that lot 11's improvement value zeroed out in 1927. That meant it had fallen in 1926 because the assessor determines valuations each year based on information received before January 1st. Lot 10's improvement value was zero in 1928, so it was reported destroyed in 1927. The Burns' lot 7 continued to be taxed for an improvement thru 1931 when"washed away" was noted in the assessment roll, but they had not paid taxes since 1928. So, the three beach cabins on lots 11, 10, and 7 of Block 61 fell in 1926, 1927, and 1931, respectively. This south-to-north progression matches studies made by the Corps and - later - academics. The reason just one of the Mallory/DeWitt cabins appears in the Corp report's photo is that the other had fallen. "About 1928" means the photographer didn't remember when it was taken, and 1927 qualifies. 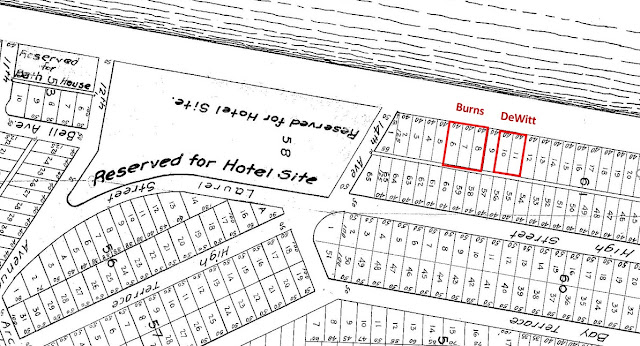 Nothing was written about these three cottages being lost to the sea in newspapers. One reason is they were tiny compared to the summer homes of Portland elite such as Johan Poulsen. Another is suggested by the Webbers: "in at least one instance, a distant owner arrived on the spit to spend the summer but he couldn't find his house" (Bayocean: The Oregon Town That Fell Into The Sea, p.78). The parties may have also feared being ridiculed for building so close to the sea if they reported their loss to the press.
To find more stories of interest, check out the Index.
No comments: