During the summer of 1921, Bayocean resort facilities were leased and operated by Reed College students John Van Etten, James Hamilton, and James Gantenbein. They employed more than twenty fellow Reedies to help out. It took them six weeks to get everything ready for the July 2 opening.

Bayocean Park had been taken over by court-appointed receivers in 1915. Six years into it, they had lost money every year. Deferred maintenance was the result. The natatorium boiler was especially hard to keep running, but Reedies Craig Eliot and Harold Robinson got it going. Regular vacationers complimented the Reedies for providing the best experience in years, and it appears to have been the busiest as well. (Oregon Journal articles of July 2, 3, 9, and 24).

Some of this success can be attributed to a letter dated June 22 (in my collection) that James Hamilton mailed "To the Teachers of Oregon" in which he makes assurances that the students' "youthful energy, efficiency and ingenuity" would be accompanied by "every effort...to quell any distrust of college ability that may exist." In case the prospect of being catered to by Reedies wasn't enough to entice teachers, he offered them a 10% discount.


Reedie George Henny set up a radio station with plans to send daily reports to a receiving station in Portland. Unfortunately, on July 25, a telephone pole he had climbed fell over, and a piece of it fractured his skull. When Bay City physician Dr. Boals saw Henny's condition he telegraphed Dr. A.E. Rockey in Portland, who reportedly drove 112 miles in just four hours (remarkable given the condition of the roads and automobiles of that era) to operate successfully on Henny the next day. (Tillamook Herald articles of June 30 and July 28). The experience must have made quite an impression on Henny because he changed his career path and became a physician. (Reed College Bulletin, April 1936)

Mark Kuestner and others at Reed College's Special Collections were kind enough to provide documents that list other Reedies who participated in the management of Bayocean during 1921. They were Carl Larson, Grace (Linklater, maiden) Stone, Alvin Pearson, Ruth Linklater, Herman Kehrli, Helen (Pippy) Kehrli, and Jean (Pugsley) Eliot.
No comments:

Healing After Sealing The Gap

Recently I spent some time perusing Bayocean photos that Lorraine Eckhardt has collected over the last few decades from fellow Tillamook County residents. Lorraine honors each source, most of whom are deceased (being a lively octogenarian herself), by noting their name on the front of each print. She also transferred inscriptions that were on the back to the front of her copies. Though I'd seen many of the photos previously, I learned more about many of them because of this. Some of them I'd not seen, like a group taken by Virgil Magarell. 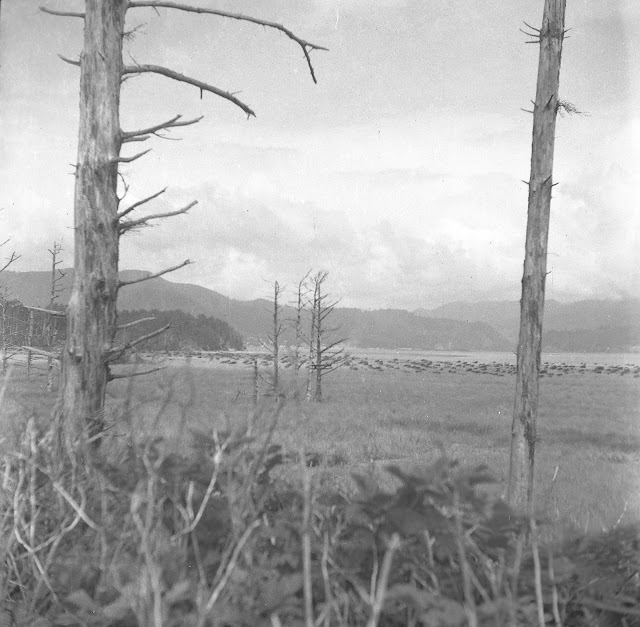 The photo on the right was taken by Magarell after the 1952 breach was sealed with a dike in 1956. He was standing at the top of a remnant dune. The trees in the foreground were killed by saltwater soaking their roots. He was looking northeast, across the part of Bayocean that was raised by 10' -15' with sand dredged from Tillamook Bay and then planted with rows of vegetation to prevent erosion when the ocean breached again. Garibaldi is in distance.

I was struck by the eerie quality of the photo. I imagine Magarell felt something similar to what I did while hiking across the blowdown area on the north side of Mount St. Helens in 1992. The land was healing, but there was still much to remind me of the great cataclysm that had occurred a few years earlier.
1 comment: