Anyone interested in Oregon's coast should know about the Oregon Coastal Atlas. Whether your focus is history, environmental issues, shoreline changes, storm and/or tsunami planning, or photographic timelines, this site offers a plethora of data, and digital tools that bring it all to life. Some of the information is not available elsewhere. For example, their Estuary Data Viewer is the only place I've found that provides a township and range map layer for Bayocean.

Would you like to stand on the beach precisely 100' below the spot where the chimney of the Hotel Bayocean Annex stood 100 years ago? Well, you can, thanks to NOAA's National Geodetic Service (NGS) and its database of survey control station datasheets kept on file even after the actual station (monuments similar to those by surveyors) no longer exist.

Excerpts from the datasheet for KINCHELOE (RD2010): 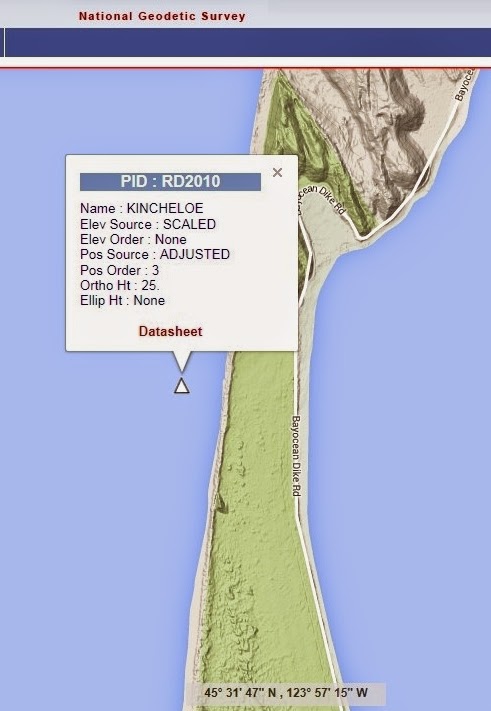 DESCRIBED BY COAST AND GEODETIC SURVEY 1926 (JMS). STATION IS LOCATED ON TOP OF CENTER BAFFLE WALL OF LARGE BRICK CHIMNEY, SITUATED ON TOP OF LARGE HALF CONCRETE, HALF FRAME, WHITE HOTEL AT BAY OCEAN, OREGON...

RECOVERY NOTE BY COAST AND GEODETIC SURVEY 1932(LAM) ...THE STATION IS IN THE TOP OF THE CHIMNEY OF THE LARGE, WHITE BAY OCEAN HOTEL, UNOCCUPIED IN 1932...

RECOVERY NOTE BY COAST AND GEODETIC SURVEY 1954 (FN). THE HOTEL ON WHICH THE STATION WAS LOCATED HAS BEEN  COMPLETELY DESTROYED AND WASHED OUT TO SEA BY THE OCEAN CURRENTS...

Photos show the chimney to be about 33' tall. So, the station would have been at an elevation of about 133', the highest man-made point on the spit.

Coordinates translated into decimal degrees are 45.52982, -123.954258. The chimney appears well out to sea on the NGS map, but you can reach it at medium to low tide. Everything west of the vegetation line (including the beach) is evidently colored blue.

Web sites like ORMAP and Coastal Atlas project the Bayocean townsite onto current areal views, so are more realistic; but they don't label the streets. Just keep in mind that the Annex was in the large block just southwest of 14th Street and Laurel Avenue (see the map at Bayocean Then And Now). 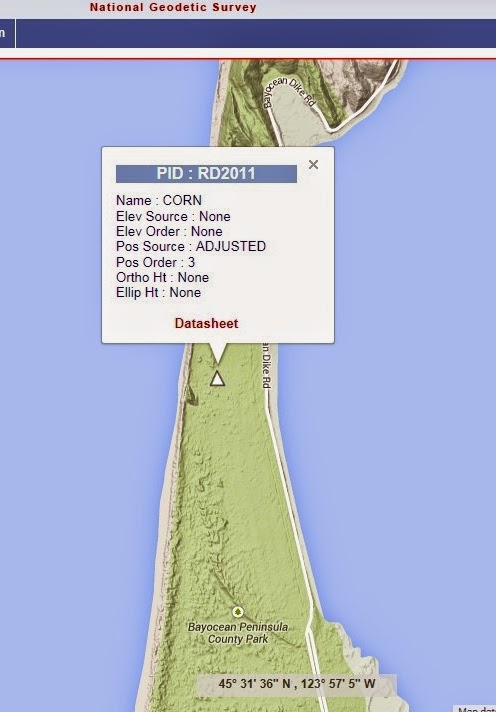 DESCRIBED BY COAST AND GEODETIC SURVEY 1954 (FN) LOCATED ABOUT 7 MILES NORTHWEST OF TILLAMOOK NEAR THE SOUTHWEST CORNER OF WHAT IS LEFT OF BAY OCEAN ON THE SOUTHEAST SIDE OF A PROMINENT PAVED STREET INTERSECTION ABOUT 260 FEET WEST OF THE WEST SHORE OF TILLAMOOK BAY AND ABOUT 8 FEET ABOVE MEAN HIGH WATER.  STATION IS THE CORNER OF A DILAPIDATED LARGE TWO STORY FLAT-ROOFED BUILDING UNPAINTED ON SOUTH AND EAST SIDES AND PAINTED WHITE ON WEST AND NORTH SIDES.  POINT     INTERSECTED IS APPROXIMATELY 35 FEET ABOVE MEAN HIGH WATER AND IS THE     NORTHEAST CORNER OF THE BUILDING AT THE TOP OF THE SECOND STORY.

This was the Bayside Inn (see Bayocean Then and Now ). If you visit the coordinates today you'll find that the Reeder family and Tillamook County surveyors have installed signs nearby to locate what had once been the center of Bayocean commerce. After the 1952 storms made an island of Bayocean, the Mitchells hung on for a while but had left by the time "FN" visited the site in 1954. When the dike was built to reconnect Bayocean with Cape Meares in 1956 the store and other ruins were bulldozed and burned. The area was then leveled with sand dredged from Tillamook Bay. 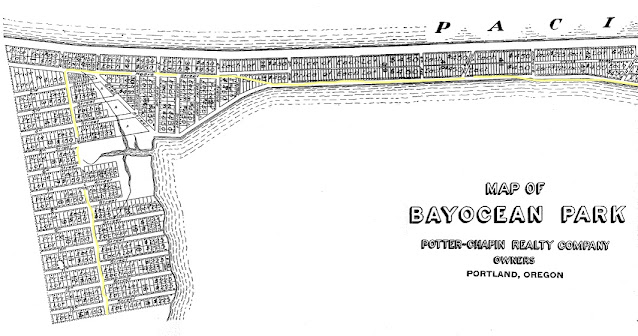 Much of Cape Meares was platted with the Bayocean resort as part of the same Bayocean Park subdivision. Their fates have been intertwined ever since.

Mears [sic] Street and 2nd Street shown on the original plat map above were both lost to the sea the same way, and over the same time period, as the townsite of Bayocean.  This is why modern-day Bayocean Road ends at 3rd Street. You can see more clearly what fell into the sea at Bayocean Lots In Pacific Ocean.

Though concrete roads had been laid on Bayocean by 1915, there was no way to reach them for another decade. By 1929, additional improvements qualified Bayocean Road as a "market road," which brought in state funds for maintenance. Eventually, the county took on the maintenance of the streets inside the Bayocean Park subdivision. Individual street names were then - at least officially - dropped, as they all became part of Bayocean Road.

Addresses 5800 and higher (northward) along all north/south streets in Cape Meares, and those along Bayocean Road from the beach to Cape Meares Loop, are part of the original Bayocean Park subdivision. Most of the buildings there now were constructed after the town of Bayocean had disappeared. The first homes in the adjacent Oceanview subdivision were built in the 1920s. Some buildings were moved there from Bayocean before the sea destroyed made it an island  in1952.﻿

The most prominent of the Bayocean immigrants was its schoolhouse, which now resides at 5690 4th Street NW, and serves as a community center. The schoolhouse and Pagoda houses were the earliest to be moved off Bayocean - in 1949. The Cape Meares Community Association later added to the building and maintains it.

Barbara Bennett lived in Cape Meares then and most of the years until her death in 2019. She recalled attending Bayocean School in 7th grade and graduating from 8th grade there in 1945. Among her fourteen classmates were her brothers Jerry and Jim Schlegel, Perry Reeder, Ernest Knutson, and the Bennett siblings: Harold, Rosemarie, and James. Barbara later married James Bennett. He was interviewed by Rick Dancer for a video called "Oregon Ghost Towns: Bay Ocean, the saddest story of all" before passing away in 2014. 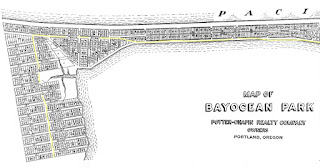 When Trees Arrived on Bayocean

The dunes of the southern Oregon Coast are free of any vegetation, while Bayocean has some very large old spruce and pine on its northern, hilly, forested section. The salal, huckleberry, and other undergrowth would have followed the establishment of those trees because they require shade to survive. When might the trees have arrived?

Obviously, sand dunes must stabilize (stop growing and moving) to some degree before vegetation can take hold. So it would have to have been after Bayocean started shrinking, as discussed in Pre-historic Geomorphology of Bayocean Peninsula.

Photos taken when the town was being built show trees and sales brochures featured them. In Coastal Sand Dunes of Oregon and Washington, William Cooper noted that when he visited Bayocean Park in 1928 it was "fairly well covered with brush and grass, and there were a few young pines and spruces upon it." ﻿﻿﻿﻿
﻿
On April 1, 1857, General Land Office surveyor Samuel Snowden noted a 16" pine in his field notes, while working on Bayocean. Various websites use 5 years per inch of diameter for pine and spruce, which matches the rings per inch I found on an old log next to the Dike Road on February 24, 2015. Based on this ratio, the pine that Snowden saw was about 80 years old. We can estimate that it sprouted in 1777 and that Bayocean has been vegetated for at least 238 years. But Paul Levesque thinks it more likely the tree photographed got there due to heavy flooding after 1934, due to the Tillamook Burns. Heavy rain landing on bare soil washed logs down into the rivers, that took them into the bay. Some likely ended up in the low spot across the Dike Road during a flood, and could not return when the water receded.

At the other end of the spectrum, the natural ecological cycle has brought trees back to the southern dunes of Bayocean more recently. Photos taken by Bert and Margie Webber, and published in their  Bayocean: The Oregon Town that Fell Into the Sea , show dunes covered with grasses and Scotch broom, but no trees. If the photos were taken before the original 1989 edition, the shore pine and shrubs present today are less than 36 years old in 2015.  If the photos were taken just prior to the book's 1992 revisions, the trees are less than 23 years old. It's nice to see young 'uns when admiring the old-timers.
No comments:

In a July 14, 2009 story, the Tillamook Headlight Herald interviewed Jesse Hayes, grandson of the man with the same name who began the first oyster farming operation in Tillamook Bay in 1928. It turns out that Hayes Oyster Company has played an important part in the history of Bayocean.

Erosion had been noticeable on the shores of Bayocean Spit since the latter half of the 1920s, and the ocean had breached the spit on multiple occasions since 1939; but nothing compared to the breach of November 13, 1952. This one spanned 3/4 of a mile and made the spit an island. It was the final blow to a town that had been in decline for years. And the sand scoured from the spit buried the oyster beds of Howard Harris and G.H. Folland (Tillamook Bay Oyster Company) and Earl Olsen, according to a story in the December 4, 1942, Headlight Herald.

Eventually, the breach developed into two lobes of sand jutting into Tillamook Bay with a gap of 3000' between them. The southern lobe reached out from Cape Meares like the pincer of a huge crab, stopping just a few hundred feet short of connecting to Pitcher Point. The gap between the two lobes became the primary ocean inlet to Tillamook Bay, and the impact on oyster and dairy farmers was devastating. As people talked, the lobes reached further into the bay, getting closer to the oyster beds of Jesse Hayes. ﻿﻿﻿
﻿
The Army Corps of Engineers finally agreed to close the gap and did so in 1956, by building a dike that started at Pitcher Point, crossed the lobes, and connected to the base of the northern hill section of Bayocean. A gate stands now at the north end, which had been the corner of 15th Avenue and Bay Street.


The Corps destroyed most of the remaining buildings of Bayocean and filled the area north of the north lobe, between the dike and what little beach remained, with sand. Over the years, a southern section of the spit was reestablished by ocean sand deposits, reconnecting it to the mainland, but the new shoreline had moved east (see Bayocean Then and Now). The land that juts out into Tillamook Bay from the modern parking lot is the tip of what had been the northern lobe. A much smaller portion of the tip of the south lobe still remains as well. The water inside the unclosed circle formed by the southern lobe eventually became Cape Meares Lake.
﻿﻿﻿﻿
﻿﻿
In the 2009 Headlight-Herald Interview, Jesse Hayes said that his grandfather contributed his buried oyster beds for construction of the dike; and that he traveled to Washington, D.C. to help Senator Wayne Morse lobby secure $11 million from Congress to pay for it. In 2011, OPB's Oregon Experience interviewed grandson Jesse in "The Oystermen". The program credits grandfather Jesse with securing an Oregon law that enabled oystermen to lease tidelands for their operations. Jesse must have been quite a lobbyist (the photo is from the Tillamook Headlight-Herald article).

Stakes in Tillamook Bay, show the boundaries of modern oyster beds. You can visit them in person, and learn about the entire oyster industry, on guided tours facilitated by Tillamook Eco Adventures. Keep an eye out for occasional announcements in the Tillamook Headlight Herald and Tillamook County Pioneer. The tour I joined last Sunday was very interesting. 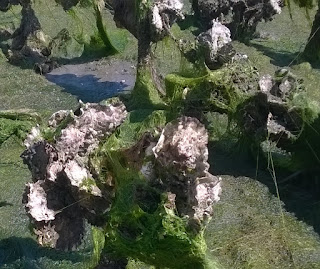 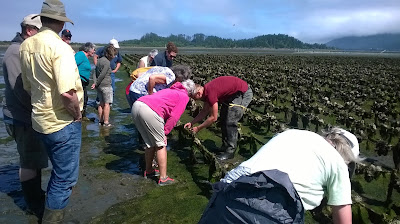